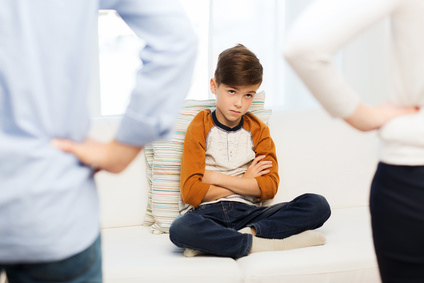 You and your wife often don’t get along. You fight frequently, bickering more often than not. But when you team up against your 11-year-old son, you get along swimmingly.

Tonight, when your son wouldn’t do his homework and then got on his iPad to play games, the two of you formed a formidable team, your wife laying out the reasons this behavior was not acceptable while you played stupid, pretending to be shocked that your son would think he could possibly get away with such a thing.

“You see? Your father can’t even believe it,” your wife said, using you as a pivot point. “He’s amazed, because he doesn’t know how often you try to pull this stuff!”

Your son looked from your wife to yourself and then threw the iPad down on the couch and shot up, yelling, “Fine! I’ll go do my homework! You people are like prison guards!”

And he stormed off. You and your wife gave each other a knowing look before devolving into an argument about laundry detergent.

“I wish we could be like that all the time,” you said when asked about the phenomenon, after your wife had gone for a jog to let off some of the steam that had built up from your argument. “But our kid’s pretty good, so we don’t have to team up against him that often. It’s kind of a shame, really. If he was awful, our marriage would be great.”