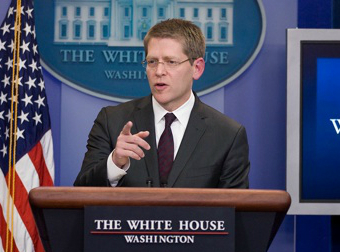 Washington – With the healthcare.gov website often down for maintenance, and not working properly even when it is active, Obama Administration officials have suggested that uninsured individuals seeking health coverage could register by phone or by conventional mail. However, criticism has mounted since those options were suggested, due to the fact that the uninsured would still have to eventually be logged into the site to officially enroll, thereby not making either option an effective end-run around the problems with the web portal.

On Tuesday, the White House unveiled a new option for those looking to enroll in a health care plan: run into the street and shout, “Give me health care!”

The suggestion came from White House press secretary Jay Carney, in an answer to reporters questions at a daily press briefing.

“We understand the website is not operating as we would like, and that the other options, the phone option and the mail option, still present people seeking health insurance with a lot of the same difficulties,” Carney said. “So today we’d like to propose that those individuals seeking health coverage run into whatever major street is nearest to them, extend both arms as fully as possible and yell, ‘Give me health insurance!’ We have place literally hundreds of thousands of facilitators — or as we call them, Navigators — all over the country, and once they hear that cry, they will come running and take that individual’s information, and get them on the road toward getting fully enrolled in a health care plan that works for them.”

Carney was immediately asked whether that individual’s information would still have to be entered in the same web portal that is experiencing problems.

“Yes, it would,” he said. “And I see where you’re going with that. But, look, this option gets them on the road to enrollment, and that’s the important thing. Plus, it allows them to vent some steam at the same time. And we know people are frustrated. And after all, aren’t we talking about improving our health here? I mean, isn’t that’s what this is all about? That’s a healthy thing to do, to relieve some stress that way. Believe me, I just screamed in the parking lot for about twenty minutes, before I came in here. I felt a hundred times better afterwords.”