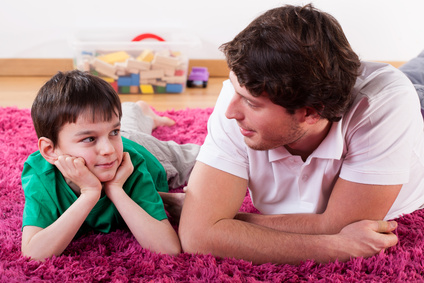 San Diego, CA – Josh Truek, a 39-year-old web designer, has five children, three girls and two boys, with his wife, Claire. Their youngest child, Maxine, is two-and-a-half. The oldest is Sadie, who is 11.

The second-youngest child, Zach, is five years old. Josh loves Zach as much as any of his other children, but he has to admit that parenting Zach has been unique, at the very least, and at times, even mind-boggling.

“He just has a lot of unique quirks and foibles, none of which were familiar to us from the three [children] that came before him,” Josh says. “Or the one that came after.”

“In their first two or so years, they did almost nothing the way Zach did,” Josh said.

Josh is familiar with dealing with foibles and quirks from his work as a web designer. He often has to account for the many differences in how web browsers behave. Specifically, Internet Explorer, especially in its earlier versions, has been known to confound web professionals across the globe with its idiosyncratic behavior, that seems completely at odds with the behavior of other popular browsers like Mozilla Firefox, Google Chrome, or Apple’s Safari.

“The differences are so stark that you have to account for them many dozens of times in one website design,” Josh said. “It can drive you mad, because this certain aspect of a design will work perfectly in all the other major browsers, but just look completely bonkers on Internet Explorer. It happens all the time.”

“The other four were pretty much the same, relatively speaking,” Josh says. “But Zach is, like, from a different planet, in terms of behavior and what have you.”

Josh is quick to point out that he doesn’t think the difference is down to gender, as his older son Lucas, 11, behaved much more like his three sisters as a younger child than he did like Max.

“I don’t think that has anything to do with it, really,” Josh said, regarding the gender issue. “I really don’t. I think Zach is just Zach, and he’s unique.”

So Josh and Claire make their adjustments, re-configure their old systems, develop workarounds, to compensate for the one-of-a-kind behavior of Zach.

“I mean, we wouldn’t have it any other way,” Josh says. “I love all my kids. Love them to death. Maybe, at the end of the day, you even have more of a soft spot for the one that drove you crazy. I don’t know. That being said, though, as a designer, I hate Internet Explorer. Like, just absolutely loathing, I feel. So, I don’t really want to think about what that means.”