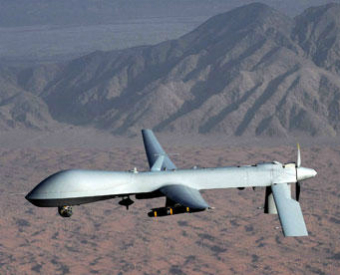 Unmanned Drone Put in Charge of War in Afghanistan

Kabul, Afghanistan – The Defense Department announced Friday that one of its many Predator drones will take over command of U.S. forces in Afghanistan, effective immediately.

The drone, or unmanned aerial vehicle (UVA), replaces General Stanley A. McChrystal, who had been in charge of U.S. and Nato forces in Afghanistan since June of 2009. Gen. McChrystal could not be reached for comment.

Pentagon Spokesman Geoff Morrell explained the thinking behind Friday’s decision, saying that Defense Secretary Robert Gates had not lost confidence in General McChrystal; he had gained confidence in the unmanned drones.

“The role of unmanned drones in Afghanistan and Pakistan has continued to increase to the point where it was mutually agreed by the Pentagon leadership that they are now experienced enough and battle-tested enough to take command of the war effort in Afghanistan,” Morrell said. “It will be a fresh approach. I don’t think anyone can deny that.”

Morrell said the particular Predator drone chosen to lead the U.S. forces would not be appearing before the press or answering any questions about possible changes in war strategy.

“It’s a drone,” Morrell said. “It won’t be giving any press conferences.”

Praising the career and service of General McChrystal, Morrell said the decision was a difficult one for Secretary Gates to make, but that he had the full support of the Pentagon leadership.

“Secretary Gates made the decision after intense discussions with military leadership and in-depth analysis of the current state of the war effort,” Morrell said. “General McChrystal did an outstanding job in his time as commander in Afghanistan. It was just time, Secretary Gates thought, for a commander who was not human. Who was an aircraft of some type.”