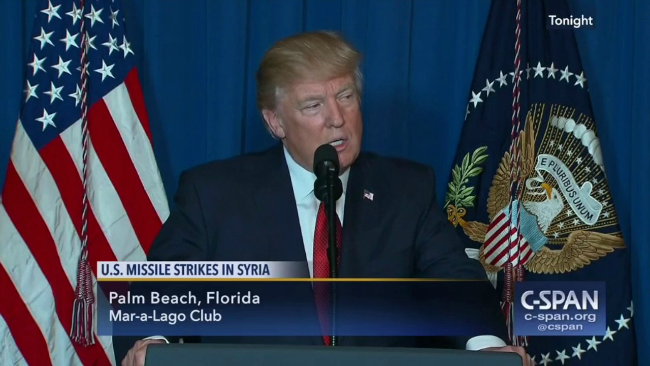 PALM BEACH, FLA – President Trump launched over 50 Tomahawk missiles at a military airbase in Syria Thursday night in a preemptive strike against a 30% approval rating. Trump spoke to reporters at his Mar-a-Lago resort following the onset of the strike.

“I am taking this bold, decisive action tonight not because I desire it, but because I have no choice — simply no other choice,” the president said. He appeared to alternate between reading from prepared remarks and speaking in an off-the-cuff manner, as he often does. “I looked at the poll numbers coming in and I said to myself, ‘This can’t stand. This cannot be allowed to stand.’ And I took action. I told the American people I would be a president who takes action and I am.”

Trump’s approval rating has been a consistent decline over the past several weeks, in part due to a well-publicized failure on repealing former President Obama’s Affordable Care Act and his multiple losses in court regarding both version of his controversial travel ban.

Trump is currently hosting Chinese President Xi Jinping at his Florida club. Reports indicate that the resort was transformed into a kind of auxiliary situation room, as Trump and his team devised their launch plan. Trump said he wanted to assure the American people that he has “the best minds, the best people” working on their behalf when it comes to foreign policy.

“We have the best people on this, ladies and gentlemen,” he said. “Rest assured. I just spoke with Secretary of State Tillerson. He is right now binge-watching all available episodes of ‘Madam Secretary.’ So he’ll be well up to speed on what to do in very short order, believe me.”

Trump called on “all civilized nations” to support his administration in taking action to stop his plummeting poll numbers.

“We have no choice in a time like this, but to act,” he said. “We cannot look back, when we are at 20 percent, 25 percent approval and say, ‘We should have done something then. When we were at 35.’ The time to act is now.”