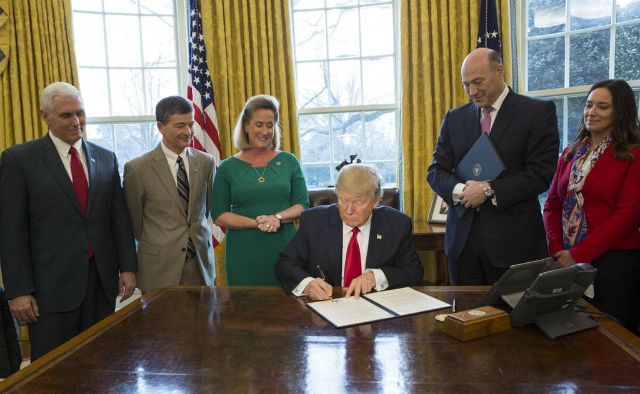 WASHINGTON – President Trump boasted of yet another project being completed “under budget and ahead of schedule” Monday, as he signed an executive order marking the death of the American Health Care Act, the bill he championed and that he and Paul Ryan decided to pull from consideration Friday when it became clear it didn’t have the votes to pass in the House of Representatives.

“I mean, look what I did with this,” Trump said, addressing reporters shortly before signing the order. “People have been talking about this for years, Republicans. Talking and talking, but they never actually did it. They never actually failed to get a bill passed. I came in and did it in record time, and at zero cost. Zero. No cost.”

Trump is correct that the bill will cost taxpayers nothing, as it will not be enacted. The timeline is a little more murky.

The AHCA was released by Ryan on March 6th. It is not exactly clear when President Trump became personally involved in trying to bring resistant Republicans around to voting yes on the bill, but as early as the following Tuesday, March 14th, Trump reportedly threatened Republican lawmakers that they would lost their seats if they didn’t get the bill passed. This was a day after the Congressional Budget Office released its damning estimate saying that 24 million more Americans would be uninsured under the new bill.

The question of whether the bill’s failure was delivered “ahead of schedule” is nearly impossible to answer in any case, as there was never a deadline announced.

“I got involved and over a few days, just a few days, maybe even two days, this thing was over,” Trump said during his phone interview. “People were amazed. It was so fast. They’d never seen a piece of legislation, a bill, fail that quickly. And at zero cost, as I said. Cost the taxpayer nothing. Not one penny. Nothing.”

Trump said the secret to his ability to complete the task quickly and at such low cost was that he didn’t “talk it to death.”

“These guys, they’re good people, but they just talk, talk, talk,” Trump said. “I mean, they talk it to death. Just do it. You have to act. And that’s what I did. I acted, and the bill was pulled after, what, a week? Two weeks of it even being considered? That’s fast. That’s real fast.”