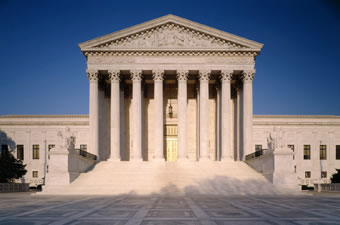 Washington – In a 5-4 decision, the Supreme Court ruled Monday that generosity, altruism and sacrifice violate the Constitution, specifically the Fourth Amendment’s protection from unreasonable searches and seizures. The ruling was considered a major blow against those who wish to help others by lending money or aiding them in some other way.

The Court ruled that Conco Corp. of Virginia did not violate James Wilson’s civil rights by terminating him for lending money to fellow Conco Corp. employees who had seen their wages and/or benefits reduced. Rather, they determined it was Mr. Wilson who violated the Constitution.

Writing the majority opinion, Justice Alito wrote, “It is our finding that the Fourth Amendment’s protection against unreasonable search and seizure is violated by one individual attempting to ‘search’ another for any available funds or aid, and then ‘seize’ those funds for themselves.”

Joining Justice Alito for the majority were Chief Justice Roberts and Justices Scalia, Thomas, and Kennedy.

“I said all along that I trusted the legal system in this country, and I was proven right to do so,” Mr. Renlington said. “We can’t have people, ordinary individuals, just asking for and receiving help willy-nilly all over the place. The system as we know it will collapse from the inside if this kind of thing continues unabated. There’s no place for empathy in an environment where you work in a company with other people. Or anywhere else, really.”

Mr. Wilson could not be reached for comment, but his attorney, Jeffrey Adams, said his client was disappointed. “My client tried to help friends of his out, honestly thinking he wasn’t breaking any laws in doing so. Now he’ll know not to do it again, to refuse any requests for help he may get, whether from co-workers, dear friends or even family members. Actually, it’s kind of a moot point in any case, as he has no job and no income to speak of and therefore couldn’t possibly help anyone out, even if he wanted to.”

Continuing the majority opinion, Justice Alito wrote, “Our nation is founded on the freedom of the individual, not the need of those experiencing difficulty tricking those who have means to help to give them undeserved rewards. Where others may say, ‘Hey brother, can you spare a dime,’ the United States says, ‘Find your own dime, because I won’t be giving you any of mine.'”