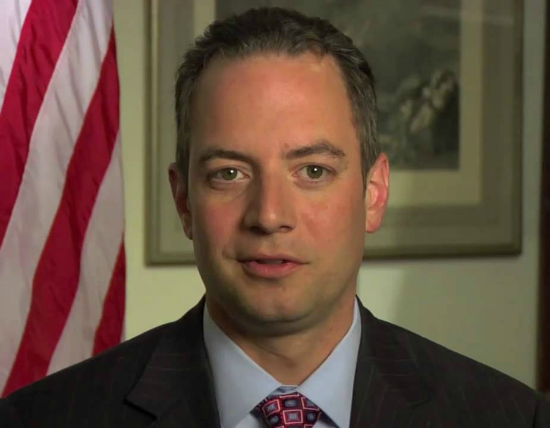 GOP to Unmarried Women: Some of You Godless Sluts Want to Join the Party?

In a video address Wednesday afternoon, designed perhaps as a way to grab some of the spotlight after President Obama’s State of the Union Address dominated the attention of the country’s media, Republican National Committee chairman Reince Priebus said the GOP has been “grossly misunderstood” when it comes to its views on women and women’s issues. The video appears to be part of a new, aggressive outreach program on the part of Republicans to woo female voters, a contingent they have been woefully unsuccessful at winning over in recent elections.

“We don’t hate women,” Priebus said. “We love women. Women give us babies. And milk. Like cows, but obviously different in many ways. Although, maybe that’s not a bad metaphor to use: an adult cow. Who talks. That’s women. And who loves cows more than this guy? Nobody, my friend, nobody.”

After a week in which former Arkansas Governor Mike Huckabee took fire for his comments about Democrats assuming women can’t control their libidos, Priebus sought to address a misconception about Republicans on that front as well — the front of women’s bodies.

“It’s been said by critics that we don’t understand the femal body, the reproductive process, so on,” Priebus said. “Let me be the first to tell you, that is completely untrue. I, for one, understand the reproductive process really well. The way it works is: a married man and woman have intercourse, if the man wants to; God touches the woman’s thingamajig; nine months later, a beautiful baby enters the world.”

On the issue of abortion, Priebus did not attempt to deny the Republican Party’s opposition to its legality and practice.

“We don’t object to abortion because we’re anti-woman,” Priebus said. “On the contrary, we’re pro-woman. We’re pro-mother, too. We’re saving her from eternal damnation in the fires of hell if she goes through with this abortion. What could be more pro-mother than that?”

Priebus continued on the subject of abortion.

“We’re not even asking you to take care of the child,” he said. “We’re asking you to bring it to term, have the baby, and then put it up for adoption. You don’t have to think anymore about that child, now that it’s been born. Trust me, we won’t think about it. Ever again.”

Finally, Priebus had some choice words on another hot-button issue of the moment, contraception.

“We’re an open, welcoming party,” he said. “We’re not opposed to you being a member just because you’re a godless slut who sleeps with men who aren’t your husband, and uses various forms of brith control all willy-nilly. We’re here for you. We want to help you mend your ways. You can find God. And a husband. And sometimes, they’re the same person. Yes, that’s right, you, too, can be a nun, if you feel such a calling. If not, we will help you find what’s missing in your life — a man to marry and submit to.”

Preibus ended the address with a simple question.

“How about some of you godless sluts join the party? Hmm?”