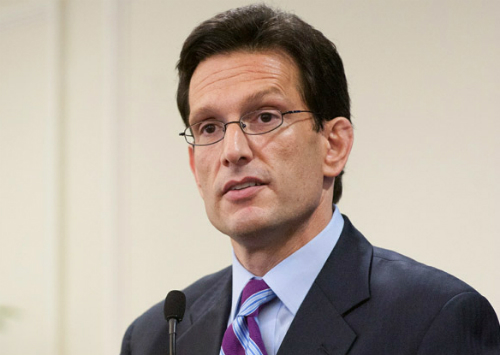 Washington – The House Republican leadership held a press conference Thursday to announce that the party is dropping both the “repeal” and “replace” portions of their oft-repeated pledge to “repeal and replace” the Affordable Care Act, also known as Obamacare. The phrase now contains only the word, “and.”

“While we are no less opposed to this destructive, highly-flawed piece of legislation, the reality is that repealing the law is all but impossible at this time,” said Eric Cantor of Virgina, the House Majority Leader. “In terms of the ‘replace’ aspect of our promise, to be honest, all we had come up with was the name: ‘Oboehnercare.’ And even on that front, I think you’ll agree, we had our work cut out for us.”

Since the Affordable Care Act was passed in 2010, many Republicans have promised repeatedly to “repeal and replace” it, including the Republican candidate for president in 2012, Mitt Romney. But none of the various alternatives that have been put forward have gained any traction, and in the meantime, the Affordable Care Act appears to have survived its disastrous rollout. The White House recently announced that they had met their goal of getting 7 million Americans enrolled in health care plans through the law, and the more time that has passed, the more of a foothold the Affordable Care Act has gained.

Finally, Cantor said, the party leadership was forced to look each other in the eye and admit the time for repealing and replacing Obamacare had come and gone.

“It is time to focus on more achievable goals,” Cantor said, “like getting a gun into the hands of every American, regardless of their age or mental health status. We can do that, if we work together.”

“I urge you not to see this as a defeat,” Cantor said. “For what word are we left with? ‘And.’ And isnt’ that perhaps the most open, the most possibility-filled word in all of the English language? So, let me say this to you today, and you can consider it a new Republican call to action, if you like. And, ladies and gentlemen. And.”