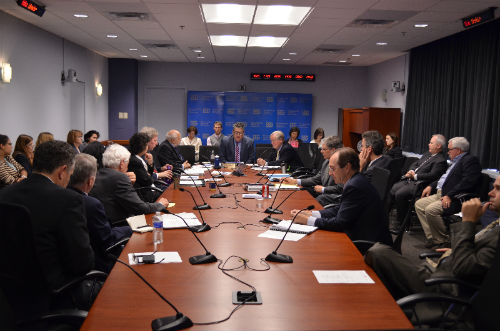 Washington – In advance of the 2014 midterm elections, top Republican strategists are meeting this week to try to nail down somewhere between five and ten new code words that Republican candidates can use when speaking about black people. Party officials with knowledge of the meetings, who would speak only on condition of anonymity for fear of upsetting party members, say the meetings are necessary because the existing code words have not been updated in some time.

“I mean, we’ve had ‘lazy,’ ‘freeloader,’ ‘welfare queen,’ all that stuff for a while now,” one official said. “It’s been years and years that we’ve had the same handful of words. It’s time to come up with some fresh, new ideas.”

The official would not divulge any details about any new code words the meetings had produced. However, an internal agenda leaked to The National Protrusion reveals some possible answers.

One agenda item is marked “possibles,” and has listed underneath it, as bullet points, “Recliners,” “Hammock-lovers,” “Shirkers,” and “Late Sleepers.”

A handwritten note at the bottom of the agenda, written by an as-yet unidentified individual, says, “Rule number one: At no time is a candidate to actually say the word ‘black’ or otherwise reveal who it is he is talking about. This cannot be stressed enough. The majority of whites and base voters will understand anyway. They always have.”