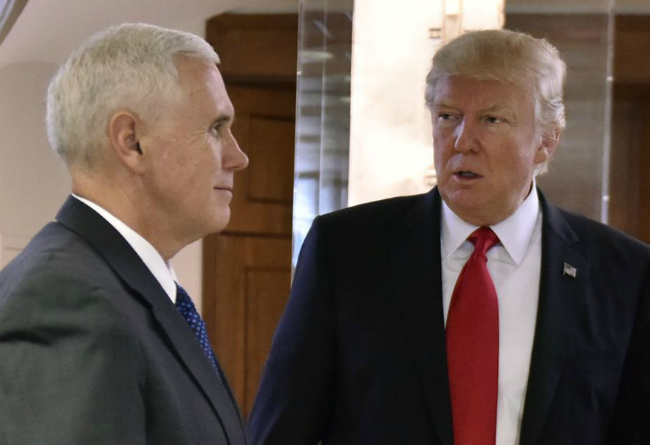 WASHINGTON – Vice President Mike Pence was obviously lying when he told President Trump that nothing out of the ordinary was discussed in this morning’s intelligence briefing, according to a White House staffer who overheard the conversation.

“He was obviously making up a story,” the staffer, who requested anonymity because he wasn’t authorized to discuss internal White House discussions, told The Bulletin. “He stuttered and hemmed and hawed, he smiled sheepishly. He couldn’t keep eye contact with Trump. I could have sworn I even saw his face turn red.”

Pence has stepped in to receive the President’s Daily Brief, or PDB, because Trump has declared he doesn’t need a briefing every day. According to the White House, Trump gets a weekly briefing.

Speculation is rampant in and around Washington that Trump and/or members of his administration in addition to retired Lieutenant General Michael Flynn may be implicated in wrongdoing regarding communication and possible collusion with Russia both during and after the presidential campaign. Some theorize that Pence is already prepared to take over as president once Trump is impeached or otherwise forced out. There is currently no evidence this is the case.

Reached by telephone, a spokesman for Vice President Pence said he doesn’t know of any discussion about Russia, “or any other particular subject, frankly.”

“These briefings are classified, for good reason,” the spokesman said. “So I don’t know what was said. But I can tell you Vice President Pence told me nothing special was discussed, certainly not Russia or any connection between Russia and President Trump. Now, was his face red and was he unable to look me in the eye when he told me that? Yes. But I don’t see what that proves.”