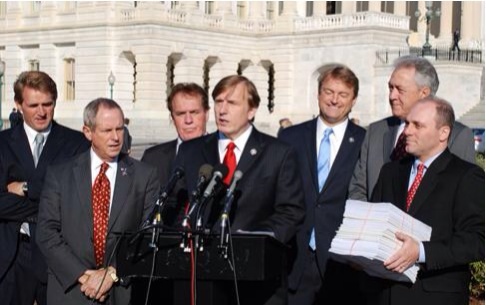 House Republicans Offer Immigrants Pathway to Legal Status, Provided they Pave it Themselves for $2.25 an Hour

Washington – Tea Party-backed Republican members of the House of Representatives announced a new proposal to overhaul the country’s immigration policy Monday, including a radical new offer that would grant immigrants in the United States illegally a pathway to legal status. However, the immigrants would have to pave said pathway themselves, and would be capped at a maximum salary of $2.25 per hour for the work.

“We want to move this country forward to a sensible immigration policy,” said Louisiana Congressmen John Fleming. He was flanked at an afternoon press conference by other members of the Tea Party Caucus, including Joe Wilson of South Carolina, Phil Gingrey of Georgia and Steve Scalise, also from Louisiana.

“Today we present a rational, measured proposal that offers immigrants a pathway to legal status, provided they pave that pathway themselves. They will be paid $2.25 an hour for this work, which we think is more than generous for work that offers the workers so much on the other end.”

Fleming pointed out that the proposal does not offer citizenship, which he said he and other party leaders consider “amnesty.”

“Our guiding principal on this was, ‘No amnesty,'” Fleming said. “These people have broken the law, and as everyone in this country knows, people without power who break the law pay the price in this country. That’s a tradition that goes back to our founding fathers.”

Rep. Gingrey reiterated much of what his colleague had already said, but also added that other measures that have been put forth by members of Congress to try to deal with this issue are wrong-headed and naive.

“What has come before has been a collection of weak-willed, destructive policy proposals, which not only don’t solve the problem of fixing our broken immigration system, but also do a great disservice to the immigrant community, as well,” Gingrey said. “It’s time for an intelligent, measured, rational response to this problem, both for our country and for the immigrants themselves. And who better to figure out how to solve issues facing a largely poor, minority community than a bunch of rich, white guys?”