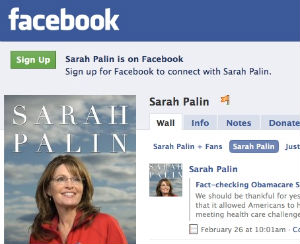 Former Alaska Governor Sarah Palin posted what is being hailed as a “masterpiece” of the genre of Facebook status updates Tuesday, wowing both literary critics and fans alike. The post has received millions of views and sparked questions about Palin’s political future.

“Today is a day for freedom,” Palin’s post began. “Isn’t that what’s so great about America?!!?! Freedom! I love freedom. And I know you do, too. You know who doesn’t? The Washington bureaucrats. They don’t see freedom the same way you and I do. They don’t value it. They just say the word, but they don’t feel it down deep inside.”

The post was part an expression of thanks to her many fans in the social networking community, and part mission statement.

“I’m going to do everything in my power to see that your freedoms are protected,” she wrote. “I may not be a governor anymore, but that doesn’t mean I’ve stopped working for you. I haven’t. And I never will. I’ll keep fightin’ till the sun don’t shine.”

The post transcends the normal limitations of the Facebook update genre, says Earl Ablenon, Professor of English at Duke University and an author of several biographies of famous American authors.

Ablenon cited specific parts of the post as examples.

“This right here,” he said, pointing to a particular point within the post, on his computer monitor. “This is a type of phrasing I have never seen before: ‘When the bureaucrats run things, that means more of the same, for sure, for ever. For sure.’ I mean, the repeated use of ‘for sure,’ and the off placement of ‘forever.’ Extraordinary.”