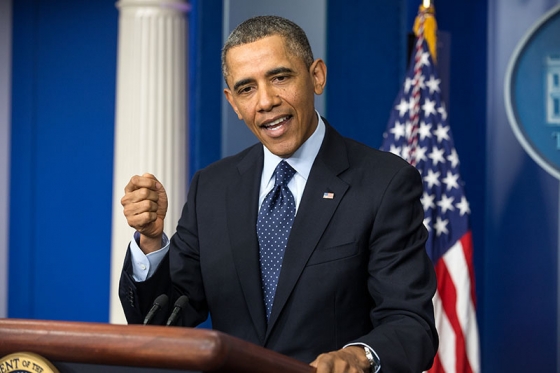 Washington – President Obama held a press conference Friday to assure the American people that his Affordable Care Act was on track to reach its target of 7 million enrollees by the year 4017. The president pointed out the date was less than 2,000 years after the initial target date, March 31st of next year.

“We will have this website up and working by no later than 3011,” Obama said, referring to healthcare.gov, which has been plagued by technical problems since its troubled October rollout. “And at that point, people will be able to get on the site and shop for an affordable insurance plan that covers them for things they really need.”

The president said that it would then take “roughly another thousand years” to get all enrollees through the entire process of getting signed up for a plan.

“We may be able to shave a few years off that number, too,” Obama said. “We’re hopeful.”

Obama also pointed to a potential benefit of the delay in reaching the target enrollment numbers.

“Look, by 4017, we may have technology that can cure a lot of these diseases and what have you that we’re seeing now,” he said. “So I’m hopeful that health care will be vastly improved when people start shopping for plans and looking for coverage. That’s exciting.”