Obama: Snowden Can Make His Case in Court, Like Any Other Guilty Traitor 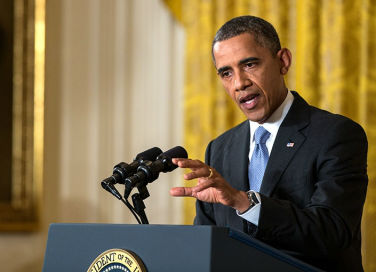 Washington – During a press conference Monday, President Obama denied that former NSA contractor Edward Snowden, the leaker of classified information regarding U.S. government surveillance programs, was a patriot or a hero, and pointed out that the 29-year-old systems administrator had other, “more reasonable” options, besides leaking details of the programs to journalists.

The president was responding to a question from Chuck Todd of NBC News, and he was unequivocal in his denouncing of Snowden’s decisions, including his accepting a year-long offer of temporary asylum in Russia, where he now resides.

“Edward Snowden is not a patriot or a hero, in my book,” the president said. “There are other avenues he could have taken. He could have come back here, to the United States, and faced the charges against him, like any other traitor to this nation, whom we know to be guilty. He would have let us incarcerate him without due process in a Supermax prison, where he would likely be stripped of his clothes, put in solitary confinement, and denied any of the basic rights that most human beings enjoy, including the right to privacy. He would have had no right to visitors and only occasional consultations with an attorney. He would have been given something approximating a trial, and quickly found guilty of the crimes we already know he committed, with the result of probably being incarcerated for the rest of his natural life in horrible conditions. Now, why he chose a different path, I can’t say, but he did.”

Snowden has not commented on Obama’s remarks, though his specific whereabouts in Russia are unknown at this time and it may be exceedingly difficult for him to make any public statements.

At another point in the press conference, Obama admitted there was “tension” with Russian President Vladimir Putin over his refusal to extradite Snowden to the United States and instead offer him asylum. This even after a letter from Attorney General Eric Holder to Russia’s minister of justice, which said, in part, “Seriously, we’re not going to kill him. You can totally send him back.”

Asked if Snowden was “brave,” Obama denied that, as well.

“If his conscience bothered him and he thought what was going on was wrong, before he chose to break the law, he could have gone to the proper authorities and told them what he thought was wrong,” Obama said. “He would have been ignored, or fired, or possibly charged with some unrelated crime and discredited, maybe disgraced in some sex scandal created out of whole cloth by the CIA, but he could have done it, and it would have been the right thing to do. And that’s the point.”

Obama was also asked if Snowden had reason to be concerned about his treatment in light of the finding of the UN special rapporteur on torture related to the treatment of PFC Bradley Manning, who was convicted of leaking troves of classified documents and other information to WikiLeaks. The U.N. rapporteur found the U.S. guilty of cruel, inhuman and degrading treatment of Manning, who was held in solitary confinement for almost a year, and stripped of his clothes on several occasions.