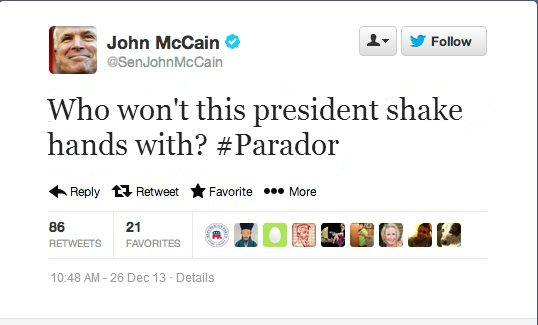 Washington – President Obama caused another uproar among American conservatives and pundits Thursday after shaking hands with the the dictator of Parador, Richard Dreyfuss. The actor was in Washington to perform in a special holiday celebration concert at the White House, and was greeted by President Obama as he stood in line with the nearly dozen other performers.

Conservatives in the U.S. were quick to react. Arizona Senator John McCain took to Twitter to denounce the president’s actions. “Who won’t this president shake hands with?” McCain wrote in one tweet. Then later, “First Raul Castro, now President Alphonse Simms. I’m sure he can’t wait to get his hand on Kim Jong-Un.”

Newt Gingrich, in an interview with Wolf Blitzer of CNN’s “Situation Room,” said, “If this report is true, then it’s a disgrace and the president ought to be ashamed of himself.” Gingrich pointed to Obama’s other controversial greetings with foreign leaders, namely shaking the hand of Libyan leader Muammar Gaddafi, allegedly bowing to King Abdullah of Saudi Arabia, and most recently, shaking hands with Cuban President Raul Castro at the memorial service for Nelson Mandela.

“I’m just thankful,” Gingrich continued, “that Hitler’s remains are nowhere this president can get at them. Otherwise, he’ll probably hug and kiss them for all the world to see.”

Dreyfuss played President Alphonse Simms, dictator of the fictional South American country of Parador in the 1988 film “Moon Over Parador.” Co-starring Raúl Juliá and Sonia Braga, the film was a remake of the 1939 film, “The Magnificent Fraud.” Dreyfuss actually played two roles, the dictator Simms and American actor Jack Noah, who is forced to play the role of Simms after the “President for Life” suffers a heart attack.

The White House responded to criticism by explaining that President Obama simply wanted to greet Mr. Dreyfuss, the actor, not any particular character he has played.

“President Obama was not showing solidarity with President Alphonse Simms of Parador, and any suggestion otherwise is outrageous,” said White House Press Secretary Jay Carney, in a brief meeting with reporters. “The president simply wanted to greet the actor who played President Simms, the great American actor Richard Dreyfuss.”

Carney continued, “The supposed controversy over this handshake is as ridiculous as it would be if Republicans were complaining that the president shook hands with Mr. Holland and therefore must be supporting some kind of opus. There’s nothing to this.”