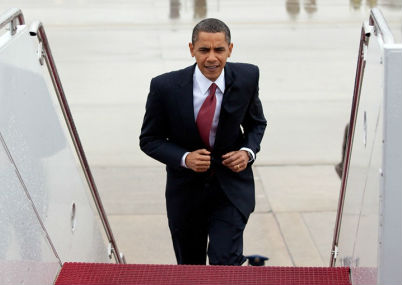 Kenton, Ohio – President Obama appeared here briefly Thursday morning, the only city in Ohio he will visit, and the first stop on a two-day, multi-state whirlwind tour. The trip is an attempt to shore up support among the 11 Americans who are in favor of his intended military strike against Syrian government forces, and implore them to urge others to get on board with the plan.

Two of the supporters reside in Kenton, two in Athens, Georgia, two in Des Moines, Iowa and one each in Anaheim, California; Butte, Montana; Carson City, Nevada; Billings, Missouri; and Salem, Oregon.

“Hello, Kenton!” President Obama said, as he bounded onto stage and saw Adam and Melissa Cary sitting alone in the audience. “Well, more specifically, hello, Adam and Melissa! How are you?”

The president thanked the two Ohioans for their support of military action in Syria, and then came down into the crowd and sat with them. “Tell your friends about how you feel, why you support this,” the president said. “Try to get some of them to see how we can’t let this kind of atrocity stand, what Assad is doing to the people there. It would mean a lot to me.”

Melissa at one point said, “We can hear you without the microphone,” a fact that the president acknowledged. He turned off the microphone and handed it to an aide, who took it away.

The president soon thanked the couple again, said his goodbyes and got back in his limousine to be transported to Air Force One. He will fly to Des Moines, IA and Billings, MO, before finishing the day in Athens, GA., according to White House spokesman Jay Carney. He will then continue his push tomorrow morning, flying west to visit the four cities remaining on his list, during another hectic day of travel.

The president returns to the White House Friday night, and plans to call any tiny nations he may have overlooked, and ask for their support.