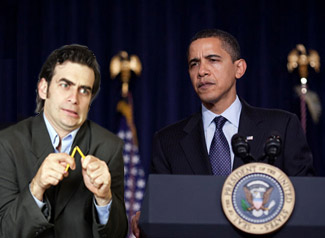 Washington – President Obama announced his appointment of Larry Brillstein as Secretary of Panic at the White House Thursday afternoon. The new secretary, if confirmed, will oversee all fear and anxiety-related programs operated by the federal government. It is a cabinet-level position.

“Today I announce one of my most important appointments,” Mr. Obama said in prepared remarks. “Larry Brillstein will bring to this position the same level of paranoia and overreaction that he has brought to every job he has held so far in his life – one of which he lost due to an anxiety attack which occurred in front of customers.”

Mr. Obama said he chose to create the position, the first of its kind, because the country is in a “particularly heightened state of anxiety,” with the economic downturn, two wars being waged simultaneously, and most recently nuclear tests on the part of North Korea and missile tests on the part of Iran.

“This is a nerve-wracking time,” he said. “And who better to guide us through it than a man who once made and canceled the same doctor’s appointment eight times, because he was too scared to go? I am certain Larry is the right man for this job.”

Mr. Brillstein addressed the press, which he said was “frightening in a way you could not possibly imagine.”

“I almost didn’t make it here today,” Mr. Brillstein said. “I looked out my window and saw a man walking his dog. I was sure he was staring at me. I became very nervous and found it hard to breathe. It is this kind of experience that I will bring to the position of Secretary of Panic. I know panic. I know panic better than I know anything else in my life. And that worries me.”

Brillstein acknowledged his limited resume, but said he would give the position everything he had.

“You can be sure that when I wake up each day and think about the job ahead, I will be nervous almost to the point of incapacitation. I’ve never let a day casually go by before, and you can be certain I won’t start now. Thank you, Mr. President. And now I should probably go vomit.”