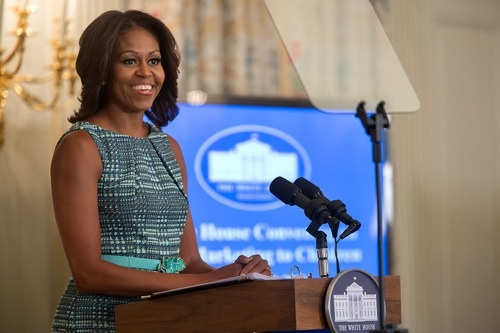 If You’re Worried Michelle Obama Will Outshine Your Kid at His High School Graduation, She Will

This week, First Lady Michelle Obama announced that she would speak at a high school graduation in Topeka, Kansas. But some parents and students quickly objected, saying seats would be limited, the event would be much longer, and the First Lady is black. They went so far as to circulate a petition asking the school administration to reconsider. So far, over 1,700 people have signed, many of whom wrote both their first and last names correctly.

Mrs. Obama was hoping to commemorate the 60th anniversary of the landmark Brown v. Board of Education Supreme Court decision, which struck down segregation in schools. And what better way to honor the anniversary of integrated schools than telling the nation’s first black First Lady you don’t want her to speak at your high school graduation?

One parent told the Associated Press that she was concerned Mrs. Obama would “outshine” her son. Yes, she will. She’s the First Lady of the United States, and your son is some kid from Topeka, Kansas. It’s not even close.

Plus, how much shining is your kid really doing? He graduated high school. He didn’t split the atom, or set the record for touchdowns in a single season, or win the Nobel Prize in literature. He merely got to graduation day with enough credits to graduate, which thousands of kids have done without being able to read. So, well done, champ. Keep shining.

The same parent also said, “She doesn’t know our kids,” meaning the First Lady. No, she doesn’t. But I’m sure Katie Couric or Bo Bice or the school administrator who would have spoken in Michelle Obama’s place is really tight with your kid. They hang out all the time. If you want your kid’s best friend to be the one speaking at the graduation ceremony, your kid needs to stop hanging out with Tommy the burnout who wears jeans in gym glass.

And, of course, all the parents and students who signed the petition will say, “This isn’t about race.” Whenever someone says, “this isn’t about race,” it’s about race. Like OJ, or Trayvon Martin, or that black kid who just got pulled over on the freeway. You may say it’s about seating and your kid’s special day, and that’s probably true, for the most part. But we have a sinking suspicion that if somehow, miraculously, Mitt Romney had won the election and Ann Romney wanted to speak at the commencement, it wouldn’t be as much of a problem. Just a hunch. Call us crazy.

But really, let’s face it. The true tragedy of this whole episode is that Mrs. Obama might have to sacrifice a trip to exotic Topeka, Kansas. She must be kicking herself. Now she’ll have to sit at home and look at a painting of grass to mimic the experience.