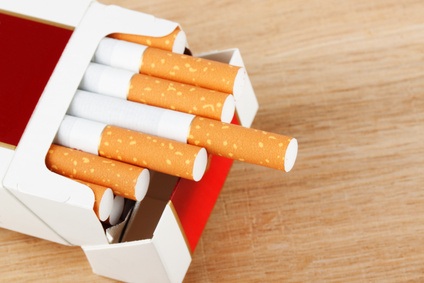 Washington – The acting United States surgeon general, Dr. Boris D. Lushniak, released a report Monday which links simply looking at a pack of cigarettes to the development of at least two types of cancer. The finding is the first time a definitive link has been drawn between viewing cigarettes and illness.

Cigarettes have long been known to cause several types of health problems, principally lung cancer and heart disease, and have recently also been linked to diabetes, erectile dysfunction and vision loss. However, all of those illnesses can be traced to inhaling, touching or otherwise consuming the contents of the cigarette. The potential of developing cancer merely from seeing a pack of cigarettes is a new and alarming finding.

It was previously thought that cancer of the eyelid was caused mainly by sun exposure and other factors, but the report concludes that “new studies are urgently needed in this area.”

The report was made up of a collection of the top literature on the health risks of cigarette smoking and is likely to be considered the definitive research document on the issue. The surgeon general’s 1964 report, released 50 years ago, was the first to state a link between lung cancer and cigarette smoking, and greatly altered the way Americans looked at smoking.

The findings of the new report are sure to cause many to sit up and take notice. Not the least of these will be tobacco industry executives and investors, says Jason R. Timelan of Norris Financial Holdings, a Wall Street financial consulting firm.

“This is definitely not good for the industry,” Timelan said. “I mean, first it was, you couldn’t smoke them. Then it was, you couldn’t even breathe the smoke from someone else who smoked them. Now, you can’t look at them. You add it all up and it’s possible to conclude there’s something unhealthy about this product.”

But for Tom Jacobi of Everson Research Group, Inc., a firm that studies consumer habits, it’s important to point out that millions of people have known for decades the risks associated with cigarette smoking, and have continued doing so anyway, even with a purchase price that has consistently increased.

“It’s a great lesson in producing a product that people absolutely have to have,” Jacobi said. “You can lose some customers over a long period, because you make up for that by raising prices, and there will be a substantial chunk of people who will pay the increase because they just ‘gotta have’ that cigarette. It’s like crack. If you raise the price of crack, people are still going to smoke crack. People perform oral sex for crack. That’s a pretty high price.”

Crack is, of course, illegal, whereas cigarettes continue to be sold legally in the United States. According to Jacobi, that’s really the only difference between the tobacco industry and the illicit drug trade.

“Legality. That’s it. Other than that, they’re exactly the same. Same brilliant business model: make a product so addictive that the customer can’t stop buying. Look: If Marlboro said, ‘Starting tomorrow, you have to give oral sex for a pack of Reds,’ believe me, you’d see a lot more oral sex happening around the convenience store.”