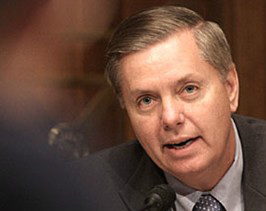 “It is imperative that the president come clean about what happened the night of September 11, 2012,” Graham said Monday. “Namely, that he murdered J. Christopher Stevens, and possibly three other Americans, with his bare hands, in Benghazi, Lybia.”

Stevens, the U.S. Ambassador to Lybia, was murdered in an attack on the U.S. mission in Benghazi, and the White House has since faced continued criticism about its initial explanation of the events that unfolded that night, and about their awareness of a burgeoning threat beforehand.

Graham made his threat to filibuster the president’s nominees late last month, along with fellow Relublican senator John McCain of Arizona. Both men pointed to a recent “60 Minutes” report by a purported eyewitness to the attack as more evidence that questions needed to be answered by administration officials. However, that report has since been retracted and was the subject of an apology by “60 Minutes” host Lara Logan on Sunday night.

The backpedaling by “60 Minutes” and CBS did not dampen Graham’s fervor, however. “I’m going to continue with trying to get at the truth, CBS report or no CBS report,” Graham said. “This isn’t about a report on ‘60 Minutes.’ This is about the president murdering a U.S. ambassador, and him admitting to that and facing the consequences.”

The nominees who may face Graham’s filibuster include Jeh Johnson, nominated to head the Department of Homeland Security, and Janet Yellen, nominated to be the new Federal Reserve chair.