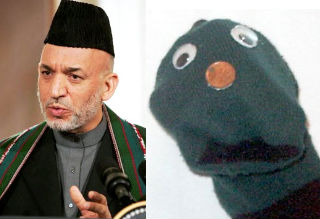 Kabul, Afghanistan – Afghan President Hamid Karzai was forcibly removed from office early Wednesday morning in an apparent coup orchestrated by military officers. Karzai is said to have escaped, and has reportedly taken refuge in the British embassy in Kabul.

Sammy, a puppet made of a large green and black sock with glued-on googly eyes, was introduced in a statement to the press as the new president.

“Sammy the Sock Puppet has been chosen to lead Afghanistan out of its current morass of corruption and ineptitude,” the unsigned statement read. “He has the vision and the experience to conquer the Taliban forces and return peace and stability to Afghanistan.”

The statement was written in English, adding to speculation that the United States had a hand in the coup. The U.S. recently expressed its unhappiness with corruption and voter fraud linked to Mr. Karzai during the recent presidential election.

But Secretary of State Hillary Rodham Clinton said she is certain no one in the U.S. government had anything to do with Karzai’s ouster.

“What we know is that President Karzai was removed forcibly, early in the morning, and that he was replaced by this Sammy, who is apparently a sock puppet of some sort,” Mrs. Clinton said. “The United States had no prior knowledge of, and no involvement in, this coup. None, whatsoever. Sammy happens to be pro-Western, according to reports we’re getting and the little we know about him. But that has nothing to do with us. That’s his choice.”

Mrs. Clinton said the State Department’s main objective at this time is to limit violence during the fragile transition period, and to ensure the safety of President Karzai.

“Right now, we’re trying not to jump to any conclusions,” she said. “We have been attempting to make contact with members of the new government, the apparent new government. We’re concerned, first and foremost, that there not be any further violence, and that President Karzai remains safe.”

Many Afghans celebrated Mr. Karzai’s departure, saying they had lost faith in his ability to lead the country even before the tainted election. One Afghan man living near Kabul, who preferred to remain nameless for fear of reprisals by Karzai loyalists, said it is only fitting that Mr. Karzai, who many saw as a puppet of the United States, was replaced by a puppet.

“Karzai did what the Americans told him to do, and only that,” the man said. “The only difference between this new puppet and Karzai is that Karzai doesn’t have the googly eyes. Though I never saw him up close. But at least with this one, I don’t know him. There’s a chance for something better.”