Issa to Investigate Whether Obama Used Wrong Fork with Salad 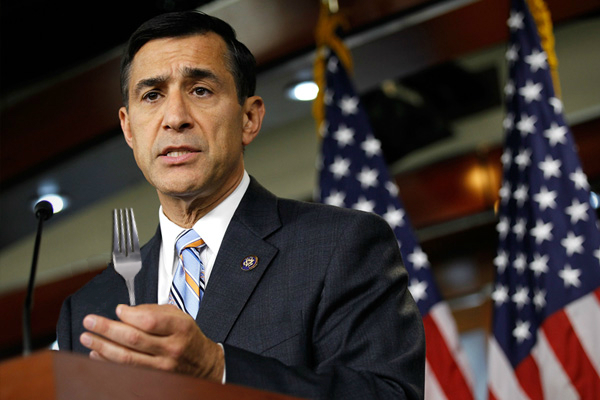 Washington – Representative Darrell Issa of California plans to launch an investigation into whether President Obama used the wrong fork with his salad during dinner at the White House three months ago, Issa told reporters Tuesday. Rep. Issa is chairman of the House Oversight and Government Reform committee, and he said he will use the full authority that position grants him to, “get to the truth, no matter where it leads.” He also said it is “extremely likely” there will be public hearings on the issue.

“I hold in my hand a fork,” Issa said during a press conference, holding a fork out in front of him so that the reporters in attendance could clearly make it out. “This is a dinner fork. Not, I repeat not, a salad fork. However, it has come to the attention of the Oversight Committee that President Obama, some three months ago, quite possibly used this fork not only to eat his meal, but also to eat his salad prior to the meal. This is a clear violation of standard etiquette and not an act which befits the President of the United States.”

Rep. Issa has already presided over hearings on everything from the IRS to Benghazi to the Healthcare.gov website, usually with the aim of bringing to light misbehavior or wrongdoing on the part of members of the Obama administration or other government officials. Many have criticized his zeal in bringing investigations and holding hearings that fail to uncover much actual malfeasance. This issue, however, is no false scandal, according to Issa.

“It is the job of this committee to conduct oversight on the federal government, and bring to light bad behavior on the part of government officials, no matter how powerful they are, or what position they hold in this or any other administration,” Issa said. “That must include the president, himself. Otherwise, the idea of oversight is completely pointless. Someone needs to get to the bottom of what happened here, with this fork, and that is what I intend to do.”

Issa was reluctant to provide any details regarding evidence he may possess, preferring to “wait until the investigation has concluded.” He would only say that the incident in which President Obama allegedly used the improper fork occurred during dinner in the White House Dining Room, attended by Mr. Obama and First Lady Michelle Obama, and that it happened approximately three months ago.

“The facts will come out, in due time,” Issa said. “And when they do, the truth about what occurred with the fork in question will be out in the open, for all to see. I look forward to that day.”