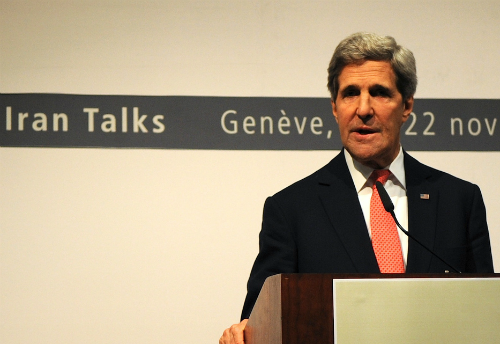 Geneva, Switzerland — The United States and Iran reached an historic agreement Sunday, the major pillars of which are an agreement by Iran not to mock the odd-looking face of U.S. Secretary of State John Kerry, in exchange for an easing of sanctions imposed on Iran by the United States and the European Union.

“This is an historic agreement,” Secretary Kerry said in a statement to reporters. “It proves that diplomacy can work, that it does work, and obviously it’s a very personal victory for me, as it is my face that will no longer be made fun of as a result of the agreement.”

Mr. Kerry’s face, and what may or may not have been done to it, has been the subject of a great a deal of debate and rumor-mongering in and around Washingon, D.C. Many Washington insiders are certain Mr. Kerry has undergone plastic surgery, which he vehemently denies.

As far as how complete the ban on mocking Mr. Kerry’s face will be in reality, that appears to be the subject of some disagreement between the parties involved in the Geneva accord.

Iranian Foreign Minister Mohammad Javad Zarif, while agreeing that the deal was historic, assured the worldwide press that the deal secures Iran’s ability to mock the faces of U.S. diplomats in the future, provided it is only done for humorous purposes.

“Iran finds this deal to be very positive, mainly because it states clearly our nation’s inherent right to mock American officials and their faces,” Zarif said. “This mocking is intended only for humorous purposes, as we have maintained all along. The idea that we are mocking with malicious intent is absurd, and history will show it to be such.”

President Obama addressed the nation Sunday to praise the negotiators and the spirit of cooperation.

“I want to thank all those involved in these monumentally important discussions,” Obama said in a statement from the White House. “What we see here is classic compromise, involving giving and taking by both sides. Iran gets much needed relief from sanctions that have crippled its national economy, and the United States gets an assurance that our Secretary of State’s face will not be made fun of, as odd and unnatural as it may look. As many have said of the agreement, it is clearly a win-win.”