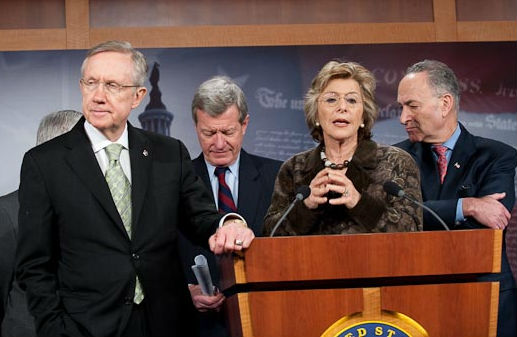 Washington – An unidentified group of hackers broke into computers used by members of the United States Congress and their staffs, and while in the system managed to balance the federal budget, according to several FBI agents and other law enforcement officials.

No one has yet taken responsibility for the attack, which resulted in what many economists are hailing as a “sensible, balanced budget,” with no other apparent damage to government computers or data.

If adopted, the budget could put an end to a bitter fight over whether or not the United States should raise the so-called “debt ceiling,” in addition to solving several other thorny budgetary and fiscal issues.

“This is a strange hack, because it looks like all they wanted to do was get in there and balance the budget,” said an FBI agent, who agreed to speak on condition of anonymity because the case is still under investigation. “There was no malicious software put on any of the computers, no information was apparently stolen — just a balanced budget left on the screens of all the congressional computers for everyone to see when they got into work today.”

Computers at the White House appear to be unaffected, as do those at the Department of Defense and the State Department.

The budget that the hackers propose, according to the FBI agents and other law enforcement officials, includes a large tax increase for the wealthiest Americans and cuts in defense spending. It also includes the closing of many tax loopholes used by multinational corporations in order to avoid paying their full share of income tax. The plan for the closure of tax loopholes was included in a supplemental document which laid out a re-envisioning of the U.S. tax code.

There was no official reaction from the White House, but rumors were swirling around Washington by late Wednesday afternoon that President Obama had read the budget and was delighted with it.

Senate Majority Leader Harry Reid led a press conference that featured other prominent Senate Democrats. The senators applauded the budget, while at the same time bemoaning the apparent ease with which the hackers were able to access what are supposed to be some of the country’s most secure computer systems — those belonging to many of the highest ranking members of its own government.

“While I shudder to think of the damage that could have been caused, and I eagerly await the results of the FBI’s investigation into this massive breach of our electronic security apparatus,” Mr. Reid said, “I am pleased that these hackers accomplished what the House, the Senate and the White House have been unable to accomplish — namely to present a balanced budget to the American people that works and does not unnecessarily gut vital programs that Americans need, now more than ever.”

Meanwhile, at his own press conference, House Speaker John Boehner harshly criticized the budget put forth by the hackers as “dead wrong,” and said he sincerely hopes the president will reject it.

“This budget is the epitome of what we do not need to be doing right now, with our economy in the state that it is in currently,” Boehner said. “This type of tax and spend philosophy will stifle hiring and stunt what little growth there is. I strongly urge the president to reject this budget, and I remind him that it was developed by people who also broke into every computer on Capitol Hill.”

Although the hackers apparently left no indication of who they might be, they did leave an identical note on the computers of Mr. Boehner, Mr. Reid, Senate Minority Leader Mitch McConnell and House Minority Leader Nancy Pelosi. The note was contained in a text file left on the desktop of each computer entitled, “Read me, dummy.”

The note read, “It wasn’t that fucking hard, idiots. We did it overnight. Get your shit together.”