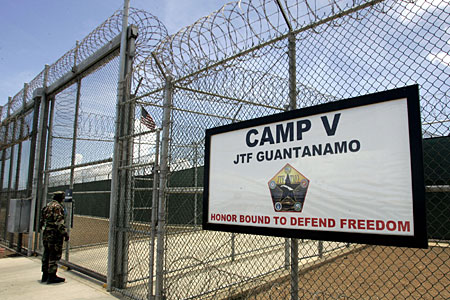 Guantanamo Bay, Cuba – Omar Nazirr, an Afghani who has been in U.S. custody at the military prison at the Guantanamo Bay Naval Base since 2003, said he has a suggestion for where to put detainees of the prison camp once it closes. Nazirr says the 240 detainees could be moved to a Ramada Inn off I-95 in Maryland. “I’ve been there,” Nazirr said. “It’s nice.” President Obama has ordered the Guantanamo prison camp closed by January 22, 2010.

There has been a heated debate in recent days over the issue of relocating the detainees following the prison’s closure. Democrats this week refused to grant funds to close the camp until the White House offers a concrete plan for transferring the detainees. Nazirr says he can help solve this problem.

“I’ll help out the U.S. on this,” he said through a fence to reporters standing outside the prison gates. “The Ramada Inn in Perryville, Maryland has plenty of rooms for all of us detainees. I’ve stayed there myself, when I was in the U.S. to study, many years ago. Before you decided I was an enemy combatant. Trust me, it will fit us all, no problem.”

Nazirr said because the Ramada Inn is affordable, it might end up saving the United States money.

“I bet you it’s cheaper than running Guantanamo Bay,” he said. “I bet you can get a good rate, too, if you get a whole bunch of rooms. I don’t want to tell you your business, but two to a room is probably a reasonable arrangement. So that’s 120 rooms. You’ll get an amazing rate. Maybe say it’s a wedding. I don’t know.”

Former Vice President Dick Cheney, told of Nazirr’s suggestion, scoffed and said, “I was thinking something more along the lines of Harry Reid’s house, if the prisoners were brought to America.”

Nazirr did not accept the improbability that U.S. lawmakers would allow prisoners from Guantanamo into the United States at all, let alone let them stay in a hotel.

“Why? What’s the big deal?” he asked. “The only difference between a maximum security prison and a Ramada is really the decor, when you really think about it.”

Nazzir pushed his idea even as he was taken back inside the prison. “I’m telling you,” he yelled. “Perryville. Fantastic.”