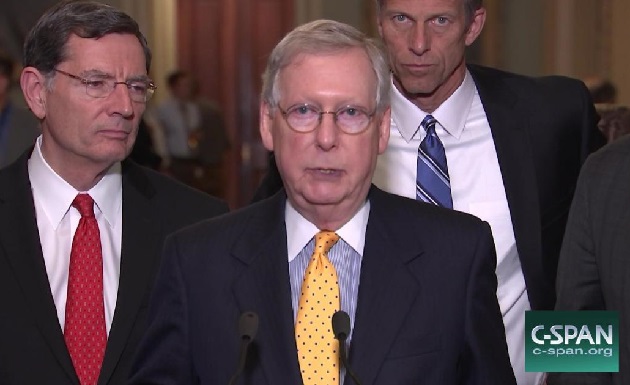 WASHINGTON – Senate Republican leadership said in a hastily-convened press conference Wednesday that President Trump’s firing of FBI Director James Comey was still somehow not enough to get them to end their support for him.

“While we are concerned with filling the position of FBI Director as quickly as possible and making sure any investigations are continued and carried out to their conclusions, we are not prepared at this time, somehow, to disavow the president or his actions,” said Senator Majority Leader Mitch McConnell, who read from a prepared statement. “For a moment, it looked like it might be time. But alas, it was not to be.”

McConnell noted that he had heard from leaders in the House of Representative as well, and that they prepare to release their own statement, but agree with the general sentiment of the Senate statement.

“Speaker Ryan is aware of this press conference, and he supports it,” McConnell said. “I’m sure he’ll make his own statement shortly.”

Many speculated that Republicans might turn their backs on Trump en masse following his insults of veteran Republican Senator John McCain. A break by a significant number of Republicans with Trump did not occur at that point, however.

Then, after Trump’s insulting of a Gold Star family, a hispanic judge and most significantly, the release of an “Access Hollywood” tape in which Trump speaks of grabbing women “by the pussy,” pundits and experts thought the GOP’s break with Trump will surely come. It did not.

Nor did it occur this week, when President Trump fired FBI Director James Comey, ostensibly for his handling of the Hillary Clinton email issue, though the bulk of the actions taken by Comey that Trump supposedly objected to happened more than six months ago.