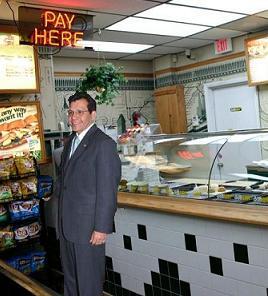 Washington – It was revealed yesterday that former Attorney General Alberto R. Gonzales has recently been spending much of his time urging a nearby Subway restaurant to implement new, enhanced sandwich-making techniques. Gonzales said the techniques would “greatly increase the rate and success of sandwich-making.”

“I’m telling you, the way you’re doing things now is just crazy,” Gonzales told Albert Mendleson, the manager of the Subway restaurant at 1331 F Street. “You go soft on people when you’re making these sandwiches, it takes forever. They want pickles. No, no, they want cucumbers. They want ketchup. They don’t. They do. It’s insane. So what I suggest is this: enhanced techniques. You get lettuce, and that’s it. You don’t like it, you get nothing. And I’m telling you, that line will move.”

It remains unclear whether Gonzales, who has had a difficult time securing employment in the private sector since resigning as Attorney General, is simply bored and has chosen to focus his attention on the Subway matter, or if he is angling for some kind of management position within the company or at a particular store. Whatever the reason for Gonzales’s interest, Mendleson seemed hesitant to take up the suggestion. “I have to clear everything with corporate,” Mendleson tried to explain. “I mean, I can’t make changes to the paint color in the bathrooms without their OK, let alone something like this. You know, increased, uh, whatever that thing was you said.”

“Enhanced. It’s enhanced,” Gonzales snapped. “Look, I don’t see how they could be against it. First of all, it’ll increase productivity, because it will take a fraction of the time to make each sandwich. It’s cost-effective, because you’re going to use less vegetables and condiments. And it lets people know, you come to Subway, you’re going to eat it the way they want it or you’re not going to eat at all. In fact, we could make it go further, and say if you complain about your sandwich, you’re locked in a room with no light for seven days. I don’t know. I’m just throwing things out there.”

Mendleson hesitated, then said, “Um, listen, I know you’ve been in a lot of important positions and whatnot, but what you’re suggesting is giving people no choice whatsoever in what kind of sandwich they get.”

“Yeah, that’s right.” Gonzales replied. “Why should they get a choice? Because Jared tells them they should?”

“But, why would they want to come here then?” Mendleson asked.

Gonzales seemed stumped for a moment, then he seemed to give up his fight. “You know what, you do what you want,” Gonzales said. “It’s your loss. I can’t make you see reason if you refuse to. Just give me a footlong tuna on white, will you? And an application.”