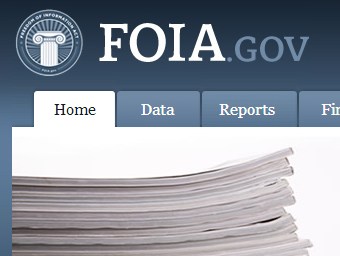 Washington – The Obama administration has classified the 1967 Freedom of Information Act, according to intelligence officials. The landmark piece of legislation, often referred to as FOIA, was signed by President Lyndon Johnson and guaranteed access to previously unreleased information and documents controlled by various branches of the U.S. government. It had a wide-ranging impact on the ability of advocacy groups, journalists and the general public to obtain information which they would otherwise likely have been unable to obtain.

The intelligence officials, who spoke on condition of anonymity, as they are not authorized to speak publicly on the matter, admitted they were not aware of the reason for the law’s sudden classification. Attempts to view the text of the law on the U.S. Department of Justice website return a 404 “not found” error page, as of 4PM est today.

The White House would not comment on why the famous piece of legislation is now classified, but White House Deputy Press Secretary Josh Earnest issued a statement which said, “The White House will have no comment on the law in question, as the fact that it has been designated classified, is itself classified. Rest assured, whoever released information about this legislation’s classification to the press will be punished to the fullest extent of the law.”

Earnest went on to say, “It should be pointed out that even if FOIA were still available to the public, a FOIA request would not allow those without proper clearance from viewing the text of the law, as properly classified material is exempt from FOIA requests.”

President Obama has appeared in the past to be a strong supporter of the law, as evidenced by a 2009 memo where the newly-elected president urged all government agencies to adhere to FOIA, and called for “a presumption in favor of disclosure.”

That memo has apparently also been classified, as it is no longer available on the whitehouse.gov website, though a copy of it does exist on the servers of the whistleblowing group WikiLeaks. It bears the subject line, “Freedom of Information Act,” and was signed by Obama on January 21, 2009, shortly after he was sworn in as President. It tasks government agencies with “reaffirming the commitment to accountability and transparency” in their adherence to FOIA. It states, “The Freedom of Information Act should be administered with a clear presumption: In the face of doubt, openness prevails.”

The Freedom of Information Act and the Obama memo addressing its implementation are apparently not the only documents to be newly classified. Also classified is Obama’s “Transparency and Open Government” memo of 2009, and H.R. 553, The Reducing Over-Classification Act.