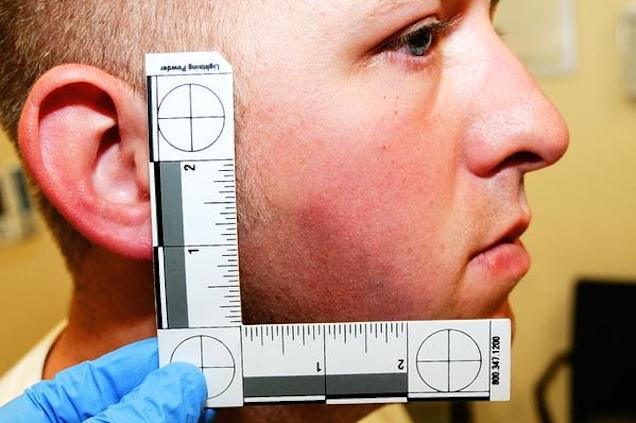 Photos released by the St. Louis County Prosecutor’s Office of Officer Darren Wilson, taken shortly after his altercation with 18-year-old Michael Brown on August 9th, 2014, appear to prove that Brown hit Officer Wilson so hard in the face that a mark was almost left on Wilson’s skin. In one of the photos, the skin above Wilson’s right jawbone is possibly reddened slightly.

“What these photos show, I think, is that Mr. Brown hit Officer Wilson in the face with such force that a little red mark was left there,” said St. Louis County Prosecuting Attorney Robert McCulloch. “That kind of inflammation of the skin is something that is not to be tolerated, with regard to the faces of law enforcement officers.”

In an interview with ABC’s George Stephanopoulos, and also in his grand jury testimony, Wilson described the punches Brown hit him with as so powerful that he might not survive even one more of them.

“The next thing was, how do I survive?” Wilson said in the ABC interview, referring to the moment following the first series of punches. “I didn’t know if I’d be able to withstand another hit like that.”

Wilson’s grand jury testimony contains a very similar passage, where Wilson says, “I felt that another of those punches in my face could knock me out or worse. I mean it was he’s obviously bigger than I was and stronger.… I’ve already taken two to the face, and I didn’t think I would, the third one could be fatal if he hit me right.”

According to Josh Lovett of UCLA Medical Center, Wilson had reason to fear for his life.

“I mean, look at the results of the other punches that landed,” Lovett said. “They resulted in a mark that may in fact be reddening of the skin, and maybe even some puffiness. That’s scary stuff, especially for a law enforcement officer. Very scary.”

In his press conference following the announcement that there would be no indictment of Officer Wilson, McCulloch, the prosecuting attorney, sought to point out the fact that Wilson’s skin is especially sensitive.

“I would say it’s obviously above average in terms of its sensitivity,” McCulloch said. “You can see it in the photos. Now, I’m not saying the irritation Officer Wilson’s skin suffered at the hands of Michael Brown justifies the shooting, but I do think people need to take extra care when getting into altercations with law enforcement officers who may have skin sensitivity issues, like Officer Wilson clearly has. Any contact could cause more inflammation, more swelling than it would on someone who doesn’t have the same sensitivity issue. And I think that needs to be taken into account.”

McCulloch had previously taken the unusual step of releasing all of the evidence seen by the grand jury, because, he says, he wanted the public to have all the facts. He says part of the reason he took that step was precisely because of issues like Officer Wilson’s sensitive skin.

“I want them to see the whole picture, not just selected snippets that they’ve gotten from social media and elsewhere,” McCulloch said. “Things aren’t always cut and dried and simple. This may appear to many to be a case of a police officer overstepping his authority, because he shot an unarmed teenager. But then you look at these photos, and you say, ‘Whoa, wait a minute. This officer has a skin sensitivity issue. I didn’t know that before.’ And that may affect how you see the situation from then on, because now you have all the facts.”