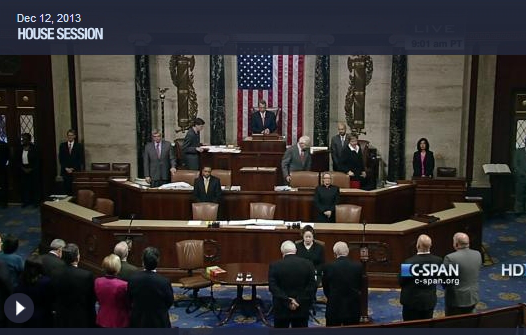 Washington – Half of the 113th of the United States passed a budget bill this week, a feat many thought impossible just a short time ago. The accomplishment has led many to hope the full Congress might pass an actual piece of legislation.

The Bipartisan Budget Act of 2013 was the result of an agreement reached between Wisconsin Representative Paul Ryan, a Republican, and Senator Patty Murray, a Democrat from Washington. It funds the government for the next two years, thereby eliminating the threat of another government shutdown in the near future. The House of Representatives passed the bill by a large margin, 332 to 94, even amid an uproar on the part of conservatives who feel betrayed by aspects of the deal, namely that it allows spending to increase. The bill now goes to the Senate, and its fate there is far from certain.

The first question is whether it will get the 60 votes necessary to even be brought to the Senate floor for a vote. Several Republican senators, including Bob Corker of Tennessee, have said they may vote for the bill to reach the floor, but then vote “no” on the bill itself. Reports say Senate Minority Leader Mitch Mcconnell will also cast a “no” vote, which may influence other Republicans to follow suit. Other GOP senators, however, including John McCain of Arizona, Lisa Murkowski of Alaska and Susan Collins of Maine, have implied they will vote in favor of the bill.

Assuming the bill does reach the floor, most analysts agree it will pass. Democrats control 55 Senate seats.

But even if the bill does pass, though it will eliminate the threat of a government shutdown for the next two years, it does not raise the debt ceiling, which will likely become an issue again in the spring. It allows many of the cuts caused by so-called sequestration to remain in place for 2014 and 2015, and it does not renew long-term unemployment insurance, which will run out for 1.3 million Americans. It contains neither cuts to entitlement programs nor any increase in taxes, essentially avoiding the largest and most contentious existing budgetary issues, and denying both parties what they most wanted in a budget deal.

Still, the bill’s main architects are proud of their near-achievement, given the rancor that has dominated debate in this congress.

“We take great pride in having a bill half-passed,” said Sen. Murray. “We’ve shown we can overcome our bitterness and extreme levels of disagreement, and get to a point where we push a bill that doesn’t do very much through one of the two chambers of the U.S. Congress. It’s a historic day.”

“Cooperation works,” Rep. Ryan agreed. “We’ve shown that. We can cooperate. We can get things done. When we work hard and compromise, we can get half of something done, and move closer to almost actually getting something completely done. We’ve proven that today.”