Experts: We Must Urgently Act on Climate Change 20 Years Ago 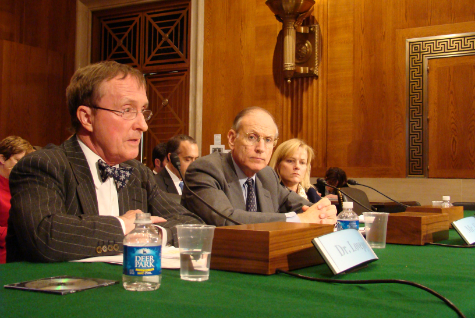 Washington – Climate experts told the U.S. Senate Committee on Environment and Public Works that the United States and other countries must act urgently and decisively, 20 years ago, to combat the effects of climate change. Doing anything less, they say, will not be enough to stave off disaster.

“The time to tackle this very real, vital issue is now, provided that by ‘now,’ you mean 1994,” said Thomas E. Lovejoy, Senior Fellow at the United Nations Foundation and University Professor in the Environmental Science and Policy department at George Mason University. “We cannot delay any longer. The time to deal with this problem is 20 years ago. The time is then.”

Lovejoy and Stuart E. Eizenstat, partner at Covington & Burling law firm and a senior strategist at APCO Worldwide, both spoke of the mid-nineties being a crucial time to ‘get ahead of a real, growing problem while we still can.’

Lovejoy and Eizenstat both stressed in their statements and testimony that delay is akin to a guarantee of catastrophe when it comes to confronting climate change, which they more often referred to as ‘global warming’ because they chose to use the terminology of 20 years prior, the mid 1990’s.

“20 years ago, we are nearing a new millennium,” Eizenstat said. “We cannot wait any longer to take the steps necessary to confront this problem. The first step in addressing this urgent, all-important problem is to admit that it is an urgent and all-important problem.”

Both men, in fact, repeatedly cited awareness as the first step in combatting the problem. Only when people realize how dire the consequences can be, will they take and demand the actions necessary to thwart climate change. Denial of climate science or the effects of climate change only hinders any progress we might make to keep climate change effects to a minimum, the men said.

“We find ourseves at an opportune moment, 20 years ago,” Lovejoy said. “Fortunately, we are still at a point where prevention of the worst is possible. We must all do our part to make this possibility a reality.”

The experts urged greater limitations on greenhouse gas emissions, stronger regulation of industry and a well-funded, mutli-pronged awareness campaign to make the public aware of the reality of the threat we face.