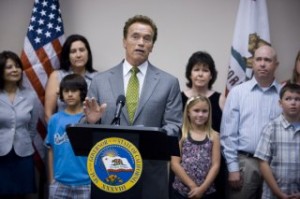 California Governor Arnold Schwarzenegger holds a press conference to announce the cancellation of the year 2010[/caption]Sacramento, CA – California Governor Arnold Schwarzenegger announced that his state will not participate in the year 2010, and instead “will skip directly to 2011.” California faces a projected $26.3 billion budget deficit, and the state’s controller began handing out IOUs last week.

Gov. Schwarzenegger held a press conference, following an emergency meeting with key staff and several members of the State Senate. The governor said that at that meeting, it quickly became clear that there was no alternative to canceling the upcoming year.

“The fiscal emergency we now face is even worse than we had anticipated,” the governor said, reading from a prepared statement. “We have decided the best option is to sit this year out, and pick up again in 2011. Hopefully, after that amount of time, and with the money we save by not participating in 2010, we’ll be back on solid financial footing and we can return to the greatness that we Californians are known for. Until then, bear down and try to get through the rest of 2009. Because after that, you can sit back and relax. You won’t be doing anything for a while.”

All state services will cease to operate, all state employees will be laid off, according to Mr. Schwarzenegger.

“As far as California is concerned, there will not be a 2010. It does not and will not exist,” he said. “If you try to call the police or the fire department, know that they will not be coming to help you. If you want a traffic light fixed, it may be time to take out your tool set and get to work with some handy friends. On the upside, you will not have to feed parking meters, and you won’t be receiving any traffic tickets. If I were you, I would save that money, because you’ll probably need it to pay for tutors for your children who won’t have a public school to attend. But there’s another upside for you kids: no school!”

Mr. Schwarzenegger said he regrets that his state will not be able to participate in 2010, as it “looks like it will be a pretty good year,” but he said he’s confident that 2011 will be a great one for California.

“I hate for my state to miss out on 2010,” the governor said, “But I know that when we pick up again in 2011, we will be doing it with renewed vigor and energy and commitment. 2011 will be a great year for all Californians, at least the ones who don’t rely on the state for any essential services, as those people probably won’t survive 2010.”