Bush Unlikely to Get White House Security Deposit Back 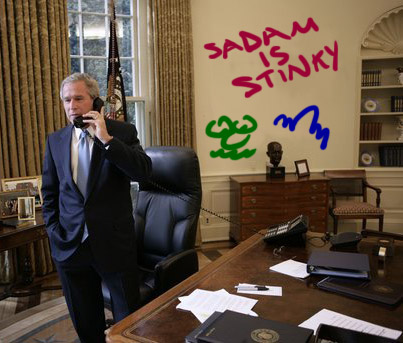 Washington – President Bush said he was “very disappointed” to learn that he will likely not be receiving any of the $3,000 security deposit he put down when he took over the White House in January of 2001. Mr. Bush said he had not expected to have the entire amount of the deposit returned, but was shocked to learn he would likely be receiving nothing at all.

Charles Lee, a spokesman for Anyuan Real Estate, the Chinese company which now owns the White House and leases it to the U.S. government, said the company could not return Mr. Bush’s deposit due in part to crayon drawings on several of the walls, most notably in the Oval Office.

“We found several drawings throughout the White House,” Mr. Lee told reporters. “Some were offensive, such as the many middle fingers on walls in various rooms. We found a half-eaten roast beef sandwich shoved into a hallway radiator, and damage to the springs and the base of the president’s bed in the Master Bedroom, apparently the result of someone jumping on it repeatedly. There was even a cartoon penis drawn on the wall in one of the bathrooms. As a result, it looks highly unlikely at this time that we will be able to return the deposit Mr. Bush gave us when we took over ownership in 2006.”

Sources say Mr. Bush would have received at least a portion of the $3,000, perhaps as much as $1,500, until an inspection last week revealed wads of bubble gum underneath nearly every desk in the White House.

“Okay, let me ask you this,” Mr. Bush said. “I’m chewing gum, right? Bubble gum. I’m blowing bubbles, enjoying myself. Well, Mary comes on the line and tells me I have a meeting with Pervez Musharraf in 5 minutes. So I keep chewing, figuring I have a good four minutes before I have to throw it out. Well, I’ll be a monkey’s uncle if I don’t get involved in whatever I’m reading, and that door opens and in walks Musharraf. Now, you’re me. What would you do? I’ll tell you what you do. You surreptitially take that gum out and put it under the desk. It’s your only choice. Otherwise you’re blowing bubbles in the President of Pakistan’s face. And trust me, he doesn’t like bubble gum.”

As for the drawings on the walls, Mr. Bush pointed out that he wasn’t drawing random pictures. “These were things related to the core issues of the day,” Mr. Bush said. “Pertinent things. They were maps of Iraq, budgets, names of leaders with little drawings of their faces, so I’d remember. Things like that. All right, there were a few middle fingers here and there. But come on. How funny is a middle finger? It’s the funniest thing in the world. You can’t resist it. No one can.”