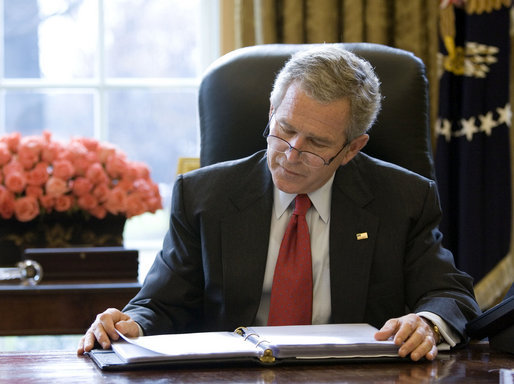 Washington – President Bush said he was “shocked” by the expectations of a United States president as outlined in the position’s job description. Bush read the job description for the first time after finding it under his desk in the Oval Office. The document was apparently under the desk for Bush’s entire time in office, since being handed to him by former President Clinton during the transition between the two administrations.

“There’s lots and lots of interesting stuff in there,” Bush said, reading from the description, which is taken from Article II of the Constitution of the United States. “I mean, this part here about, ‘he shall take care that the laws be faithfully executed,’ stuff like that. Really interesting. Stuff I never would have thought of doing.”

Other points of interest for the President had to do with dealings with foreign countries. “It says I have the power to make treaties with other countries,” Bush noted. “Not that I’d want to do that, but it’s interesting to think I have that power. It’s really neat that they invested so much in the president. I like it.”

Mr. Bush said he would plan to make some changes in the way he goes about his job, but with such a short time left in office, there isn’t much he can do. “If I had longer, I would probably make some adjustments,” Bush said. “But you know, at this point, it’s not much use. I think I’ll just chalk this up to a learning experience: next time I’m president, I’ll read the job description beforehand, not wait till right before I leave office.”