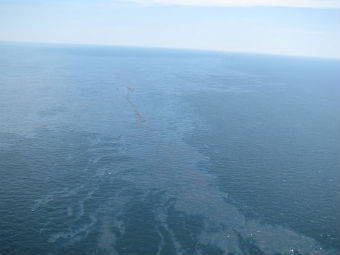 New York – With oil from a blast-damaged rig continuing to flow into the Gulf of Mexico, the price of a gallon of the Atlantic Ocean’s water rose 5.4 cents Friday, reaching a record high $2.79. It was the largest single-day increase in nearly 27 years.

Investors heartened by the release of a BP-sponsored study showing the ocean is now 3/5s crude oil also brought Atlantic Ocean futures up $1.50, to close at $76.39 a barrel on the New York Stock Exchange.

“Once the study’s results were announced, it was like a switch was thrown,” said J.J. Thomasy, a consultant with Richards and Richards Investment Group, based in New York. “Everyone realized, ‘Wow, the ocean is an incredibly valuable commodity, when it has all that oil in it.'”

The oil spill, the largest in the nation’s history, began April 20 when an explosion aboard the oil tanker The Deep Sea Horizon caused thousands of gallons of oil to gush into the gulf. Government estimates of the amount of oil flowing into the gulf have been revised upwards to 60,000 barrels a day. The spill has greatly harmed sea life and the commercial fishing industry. The long-term health and environmental effects may not be fully understood for years to come.

But on the bright side, says John Klanke of Merriweather Financial Holdings, you can now power your car with ocean water.

“I mean, it’s horrible to say it, but my friends and I ran a test and found that a gallon of water from the Gulf of Mexico got our car to the grocery store and back,” Merriweather said. “That’s big. You want to talk about energy independence, how about we don’t need Middle East oil anymore because the whole ocean to the east and south of us is made of oil? Can Saudi Arabia top that? I don’t think so. Talk to me when the Red Sea is black, my friends. Black and slick.”

Asked why BP commissioned the study of the percent of oil in the Atlantic Ocean’s water, company spokesman Brian Turney said, “Well, we wanted to show that the spill wasn’t all bad. I mean, yes, of course there are negative aspects to it. But you have to look at it from a new and different perspective. You have to think outside the box. Think about it: who would have thought of using the ocean to power our automobiles, had this incident not occurred? Sometimes great ideas happen from terrible accidents. Like the chocolate falling into the peanut butter in that commercial. And look what came from that — deliciousness.”