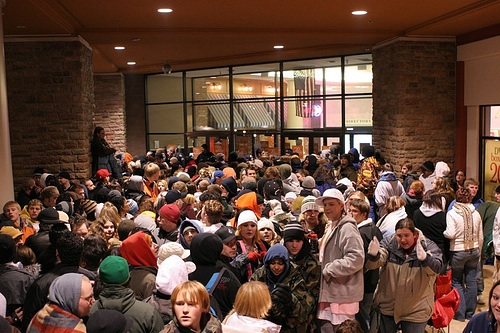 The Garfield, N.J. Wal-Mart, like many other Wal-Mart stores across the country, extended its Black Friday hours to try to compensate for a shorter-than-normal shopping window between Thanksgiving and Christmas. The Garfield store held a special sale between 12 a.m. and 3 a.m. early Friday morning, and then opened for business again at 8 a.m. Lines were very long for the early-morning sale, and when the doors opened at 12 a.m., eager customers stomped on one another on their way to saving money on linens, household goods, and electronics.

“I got some great deals,” said Beverly Rondo, who drove several hours from Pittsburgh, PA for the sale. There are several Wal-Marts closer to Beverly, but none of them were offering the early-morning sale that the Garfield store was offering. “I got a big-screen TV for next-to-nothing. I had to trample someone to do it, but to be honest, that makes it feel a little sweeter.”

Beverly missed Thanksgiving dinner with her family, because she wanted to be sure she would be in Garfield before the doors opened at 12 a.m. “It was worth it,” she said, of missing the holiday meal. “I got so many things at great prices. I got a blender for a third of what it would normally cost. No one I know wants a blender, but it was a great deal.”

Beverly’s trampling of a fellow shopper occurred when they were both trying to get one of the incredibly cheap big-screen TVs.

“The doors had just opened,” Beverly said. “And everybody ran for the TVs. And all of a sudden, I look up, and there’s only one left. And this guy — a big guy — is heading right for the same TV I want, the last one.”

She’s not sure what happened, exactly, but Beverly says she was overtaken by some type of superhuman strength.

“I don’t know, it was like what they say happens when you’re in a life-threatening situation. I had this crazy strength, all of a sudden. I was able to just walk right over this big guy, just topple him right over and walk on his face. And I got to the TV before he did. He was so mad. Well, he looked mad, when I glanced back at him. But then again, that could have just been my footprint on his face.”