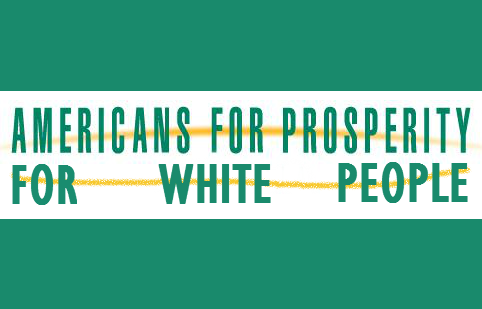 Americans For Prosperity Adds “For White People” to Name

“We felt like it was time to be more forthcoming in our choice of name, to really talk about what it is we’re after, what our mission is, and who it’s for,” said Levi Russell, a spokesman for Americans for Prosperity. “Everyone knows where we’re at anyway. It’s not like this is some big shock.”

The group, formed in 2004, is backed by billionaire brothers, David H. Koch and Charles Koch, and has spent hundreds of millions of dollars on advertising and publicity campaigns in an effort to influence local and national elections and further conservative causes. Tim Phillips serves as the group’s president.

Repealing the Affordable Care Act has been a central object of the group’s advocacy efforts. They sponsored a 2009 “Hands Off My Healthcare Tour,” where they warned of a government takeover of the health care system. The group favors a free market approach, because, of course they do.

Asked what specifically spurred the group to change their name, Russell said, “After Obama’s lie about keeping your health plan, we thought it was time for some honesty. Maybe we can teach the president a thing or two.”