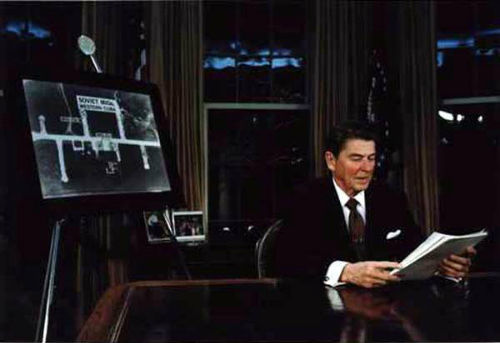 Cambridge, Massachusetts – John Donoly, a former policy adviser to President Ronald Reagan, fondly recalls the day he understood for the first time that the president was not joking about his “great new idea.”

“He was excited,” Donoly said, referring to Reagan. “He was like a child, in a way.”

The “great idea” Donoly is referring to is the Strategic Defense Initiative, a missile defense program proposed by Reagan that entailed potentially shooting at nuclear missiles from space and from the ground, possibly using lasers. The program never materialized.

Mr. Donoly, now 83, recounted his five years as an economic adviser to Reagan on everything from interest rates to farm policy during a lengthy interview in his home. Specifically, he spoke of what he thought was a “running joke” between he and President Reagan about a way to stop enemy missiles from hitting the United States after they had already been launched.

“I had a good relationship with President Reagan, and we talked often,” Donoly said. “It had gone on for weeks, him talking about this, but I thought he was just kidding. I would laugh, and say, ‘Yes, Sir. Sounds good to me.’ And then we would talk about whatever I was there to talk about.”

But after a while, Donoly started to suspect the president wasn’t making a joke — Reagan was serious about this.

“He got more specific about it, and described to me how he envisioned it working,” Donoly said. “And that’s when I first thought, ‘Oh, wow. This could be for real.’”

But it wasn’t until Mr. Donoly was present in the Oval Office during a particular phone call that he was certain the idea was genuine.

“The president got on the phone one day with [Defense] Secretary [Caspar] Weinberger, and brought it up to him,” Donoly said. “I knew then it wasn’t a joke. Weinberger had no sense of humor, you see, so there would be no point in joking with him.”

Shortly thereafter, Donoly says, “I was called to a big meeting, and lo and behold, the subject was this plan — the missile defense plan.”

President Reagan proposed the plan in a speech from The White House on March 23, 1983. It was called the Strategic Defense Initiative, but was soon given the name “Star Wars” by critics who thought it fanciful. The plan never got off the ground, and was later eliminated in favor of alternative missile defense strategies.

For Donoly, the whole thing is still slightly unbelievable.

“Even now, when I think about lasers from space shooting at nuclear missiles, I can’t quite say I believe it,” Donoly said. “I mean, it is insane, right?”